There are a lot of things your guild will need to consider. Do you want something fantastical or science-fictional? Are you focusing more on questing as a group, or do you want to kick butt in PvP encounters? Do you want participate in competitive tournaments? How much grinding are you willing to do?

Overwhelmed yet? That’s okay. We’re going to help you out. (And not just by being the best place to host your guild site.) We’ve done the research and collected a list of guild-friendly MMOs that currently have active online communities. Let’s take a look at what these games have to offer you and your guildmates. 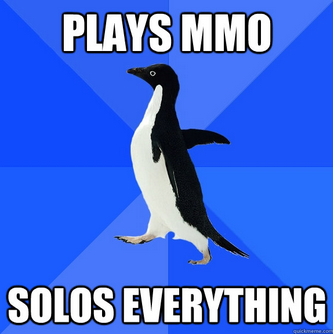 Don’t be this person. Use Gamer Launch. (Sauce)

World of Warcraft has long been the go-to MMO, making it an obvious choice for this list. And with an upcoming, unnamed expansion that will be announced at Gamescom, interest in the game will definitely be renewed. But we don’t want to tell you what you already know, so here are a few WoW alternatives that your guild may find appealing.

Up until recently, TERA was pretty much dead. But after moving to free-to-play, launching on Steam, and adding a new gunner class, it’s exploded into an active community once again. And now it’s one of Steam’s most-played MMORPGs.

This Korean title has been accused of being a little too grindy, but many more reviews praise the game’s combat system as being one of the best around. Its stunning graphics and action-oriented gameplay will keep you and your guildmates immersed in this fantasy realm.

FFXIV isn’t free to play, but it’s had a consistently active community since its release in August 2013. This reboot of the horrendous Final Fantasy XIV Online has received overwhelmingly positive reviews. Many users agree that the game single-handedly ruined their social lives.

4,500 hours. Does he remember what outside looks like? (Sauce)

In what some players hail as the best pay-to-play MMO around, you can explore Eorzea with your guildmates and challenge familiar enemies from the Final Fantasy series. A Realm Reborn also got a huge expansion last month, titled FFXIV: Heavensward, that added the city-state of Ishgard and tons of new content for players to quest their way through. Bonus: we’ve got a TON of guides to help you conquer both A Realm Reborn and the new expansion.

Set in the fantasy world of Tyria, Guild Wars 2 has received nearly universal acclaim since its release in 2012. Its beautifully detailed environment is constantly evolving, and the game encourages players to explore more than other MMOs do. GW2 allows you to play with your friends, regardless of their class or level – a big perk for guilds with a wide variety of play styles and skill levels. Users have also praised the game for avoiding the dreaded grind and fostering an active community of players.

If you and your guild are into competitive play, Guild Wars 2 has a healthy eSports circuit as well. At this year’s Gamescom, teams will competing for a $50,000 prize pool in the GW2 World Tournament series.  The game is also slated to get its very first expansion (dubbed Heart of Thorns) sometime in the future, but the exact release date hasn’t been announced.

This game is still in Early Access on Steam, but players are loving it. Built on the Unreal Engine, ARK is the beautiful dinosaur game we all wanted but never got. It’s possible to play this one on your own, but you’re going to want to bring some friends along if you plan on using the PvP servers. On the island of ARK, you have to gather resources, craft items, hunt, build shelters, and much more in order to survive this primal world. There’s also an active modding community, thanks to Steam Workshop. 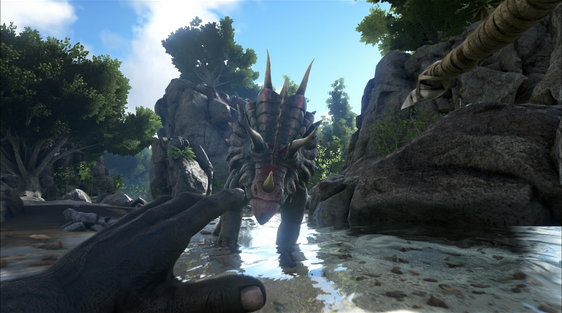 That may sound dull to some of you, but here’s the kicker – you can train and ride dinosaurs. Want to raise an army of dodo birds that can take down a T-Rex? You can do that. Want to mount a velociraptor and wreak havoc on enemy territory? You can do that, too. But casual players beware – users say this game is very grindy (though it’s all worth it).

Some would probably disagree with the inclusion of this particular MMO. But we promise we’re not trying to lead you astray. Elder Scrolls Online was a huge disappointment during the beta and initial launch phases. But after several huge updates and its conversion to a buy-to-play model, ESO apparently “doesn’t suck anymore”.

If your guild goes into this game expecting Skyrim online, you’ll be disappointed. It’s really only loosely related to The Elder Scrolls RPG series (and it was created by a different developer). If you can set those expectations aside, you’ll get an MMO with fantastic storytelling, an immersive economy and crafting system, lots of voice-acting, and satisfying solo and group encounters.

This MMO sandbox takes a visual cue from Minecraft, which sets it apart from all the highly-detailed games on this list. Players can pick from five different classes that have unique abilities, as is standard RPG practice. Groups can adventure together through an endless number of worlds and player-created areas with as much or as little combat as they like. (There are plenty of other activities like farming and fishing that can hold your attention.) 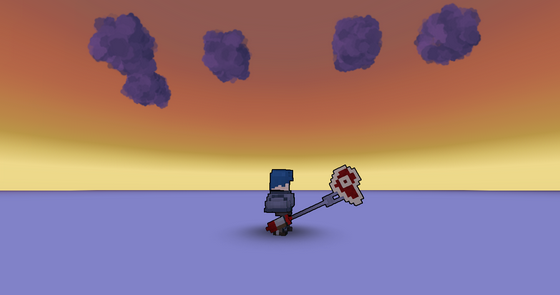 Why yes, that is a melee weapon shaped like a steak. (Sauce)

If the existing worlds aren’t to your liking, you can create your own areas – complete with side missions and monsters. Anything that isn’t the starting area can be destroyed or built upon. You can even create your own items and submit them to the player market in order to receive a cut of the profits. The possibilities are infinite.

The last MMO on this list, but certainly not least, SWTOR has a stable community in spite of its troubles at launch. Many players returned to the game after it became free-to-play. If you and your guild get bored easily, this game is worth checking out. There are frequent in-game events, and expansions are released twice a year.

Critics and users alike have praised the game’s voice acting and story, as well as the amount and quality of content available. Unlike other MMOs, The Old Republic also has a lot of accessibility options for guild members with special needs, such as full subtitles, auto-looting, a colorblind-friendly minimap, and much more. With the new Star Wars movie coming out in December, this might be the perfect time to play.

Any one of these MMOs could offer a rewarding experience to you and your guildmates. It all comes down to personal preference. They all have active communities, both in-game and on forums/subreddits. Whether you want to ride dinosaurs or explore a dungeon while wearing a banana peel hat, there’s a game on this list for everyone. Head over to Gamer Launch and round up your guild to get your new adventures underway. Happy questing!

4 thoughts on “The Best Games for Your Guild: MMO Edition”