The road to the SMITE World Championships is getting shorter and shorter. This week, North American and European teams will be facing off in the Super Regionals event to decide who will nab the top spots for the World Championship in January.

Day 1 is already over, with four NA teams battling head-to-head in the Quarter Final round. Team SoloMid took on Team Enemy, and Enemy came out on top with a 3-1 upset in the best of 5 round. In the second game of the day, old rivals Cloud9 and Cognitive Gaming faced off once again. If you tuned into the SMITE World Championships last year, you know that Cloud9 and Cognitive had a showdown for the first place prize. Cognitive came out on top then, but Cloud9 turned the tables this time around and took the second Quarter Final win in a 3-0 shutout.

After Day 1, here are the brackets for the NA teams: 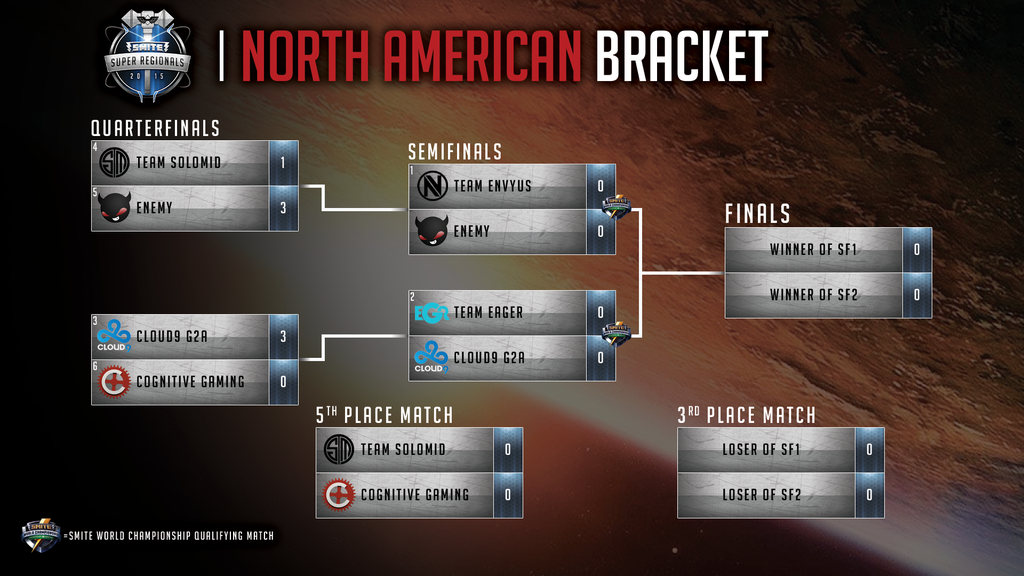 We’re going into Day 2, where we’ll see four EU teams play for spots in the EU Semi-Final round. London Conspiracy is taking on Titan this morning, followed by a Paradigm vs. Team Dignitas matchup. The winners of these games will move on to the semi-final matches on Friday.

Here’s what events are left in the schedule for the Super Regionals:

To catch all the action, you can tune in to the official SMITE Twitch channel, or keep up with them on Twitter @SmitePro. To play some SMITE yourself, head on over to Gamer Launch and find a game to join!