Remember when I wrote ages ago that no one likes guild drama? I stand by that, because no one does like guild drama. But there’s a difference between not liking something and pretending that it shouldn’t exist, and running a guild as a “drama-free zone” is a bit like trying to run your local business as an oxygen-free zone. Whatever good reasons you might have for doing it, you’re going to wind up with everyone promptly leaving so they can breathe.

You think I’m exaggerating, but in this case I kind of am not. I think we need to move on from the idea that guild drama in and of itself is toxic or undesirable.  It can be toxic and undesirable, it can create an environment of festering anger and constant argument, but it’s more often the case that hamhanded attempts to avoid that drama wind up creating that environment.  So let’s talk about learning to love drama, starting with all of the positives it brings.

Why guild drama is a good thing

Let’s be clear here – what we’re talking about here is a genuine moment of guild drama.  We’re talking about arguments between members that have spilled out of private chats and into public.  It’s a bit like an open wound, which sounds bad, until you realize that open wounds are the first step toward having that wound heal.

First and foremost, guild drama means that you have a guild which people care enough about being a part of that they would rather fight than leave, and that alone is a good sign. When it comes to the vast majority of scenarios in life, we’re more inclined to leave than fight over something.  I don’t get into a lengthy argument with the manager at any restaurant with poor service, I just don’t go back. Caring enough to argue is good.

It also gives you an opportunity to help shape what sort of guild you want to be, to create a precedent for dealing with awkward situations, and it indicates that the guild isn’t a single unified clique without any dissenting opinions.  It also indicates that the guild’s overall environment is receptive to complaints. You can squash that, yes, but if no one ever talks in the guild’s chat channels, that doesn’t mean the guild is necessarily full of happy people free of conflict, it means that people are scared to speak up and offer a viewpoint.

Last and certainly not least, it’s frequently a good sign of what the guild as a whole is failing to do properly.  If arguments are centered around whether or not someone should have gotten a piece of loot, there’s clearly something wrong with how the guild as a whole handles loot and such, or at least some miscommunications.  Yes, you’d prefer to identify problems without arguments centered around them.  You’d likely also prefer to not work to pay your bills, but that isn’t an option either.

In short, while guild drama is annoying to go through at the time, it shows important things about the guild and can be a tool to make the group better.  Not that shutting it down pre-emptively is actually concerned about any of this. 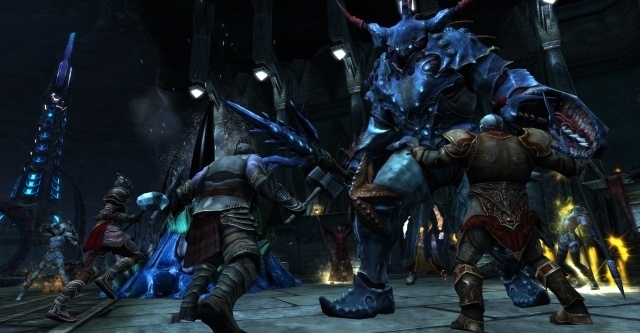 “I hate drama” is a statement up there with “I hate being arrested.”  It’s almost certainly true, but it’s also true of nearly every human being on the planet, and it’s ignoring the rather important question of why drama is starting/you are being placed into the back of a squad car.  Usually, at least in the drama case, I find that the people who claim to hate it the loudest are also the ones who tend to cause it with the greatest vigor.

One of the things that I actually talked about in my very first column on this site was that guilds where the only rule is “no drama” don’t talk about what actually causes drama, they just shut it down pre-emptively. Not only does that mean leaving the benefits of potential drama on the table, it usually indicates that there’s some sort of dramatic past going unstated. People who claim to hate drama are generally followed by it, and when you’re constantly being followed by drama it’s not because you aren’t related to causing it.

People who claim to hate drama are generally followed by it…

Shutting down any sort of drama also has the downside of creating one of two unhealthy environments.  The first possibility is that you create an environment wherein drama just quickly gets decided along the lines of whomever the officers like more, which is uncomfortable.  The other possibility is that drama is shut down immediately regardless of any decisions, making everyone unwilling to say anything for fear that contradiction will earn them a swift kick in the seat. Neither option produces a healthy or stable guild.

So that’s another thing to consider when it comes to guild drama – however much you may dislike it, the alternative shuts things down with so much vigor that discussions can’t take place at all, which is notably worse.

Recognizing that guild drama is inevitable and even potentially advantageous does not mean that it’s something you want to deal with day in and day out, of course.  Which leads to the point that what you want to do is ultimately discourage guild drama rather than outright disallowing it.  And that, ironically, is a great way to curtail drama in and of itself.

Seems backwards, I know. But the reality is that guild drama is inevitable.  That doesn’t mean it’s hard to avoid, that means you literally cannot avoid it.  It will come up, no matter how many rules are in place to prevent it.  The only question is when it will boil up and explode, and if you place rules in the game that advocate never allowing members to place drama on the table, what you’re actually doing is creating an environment wherein people still feel the stress but don’t actually take steps to address it until everything’s at a boiling point.

But the reality is that guild drama is inevitable. That doesn’t mean it’s hard to avoid, that means you literally cannot avoid it.

In other words, making a rule of no drama only ensures that when the drama happens – as it will – you are facing not a mild blip of frustration but a boiling over, an explosion of pressure that has been building for a long time, until the person exploding simply cannot take it any longer.

So you want a means for people to vent, and you want to allow drama to happen naturally.  But you also want to have mature and calm resolution options in place.  You want to encourage players to come forward with problems in a calm and encouraging fashion, to bring up grievances in such a way that they can be resolved and fixed in a timely and productive manner.  Not only does that help encourage players to vent and provide feedback before things reach a crisis point, it discourages needless guild drama, providing players with outlets and constructive means to deal with problems.

In short, trying to stop guild drama is pointless.  Learning to recognize it for what it is and promote a controlled environment where it’s just discouraged and seen as counterproductive makes for a better gameplay experience for everyone.  There are reasons to love it after all.