The NFL may have kicked off the first official games for this season, but the real excitement is happening on the eSports scene. Although we’ve already seen a few major events like the SMITE World Championships and the Dota 2 TI5, tournament season is nowhere near over.

As summer comes to an end, the eSports community is gearing up for four world championship tournaments this fall. And three of them are happening at the same time. You can’t get that kind of action anywhere else. Here’s what’s left on the competitive calendar for this year:

The 2015 teams for the League of Legends WCS were locked in last week. Here’s who you’ll see on the Riot stage: 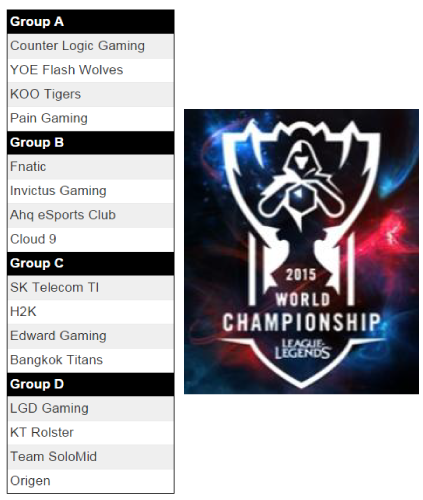 Hearthstone World ChampionshipsMatches start on October 1, and the two teams left standing will face off in a best of five match On October 31 in Berlin. The victor will walk away with a $1,000,000 prize.

The Hearthstone worlds are also in progress. The North American Qualifier is currently underway, and will run until September 20th. Once the NA Qualifier is over, players will move on to the NA Championships – the last event before the World Championship Tournament at BlizzCon 2015.  From November 6 through November 7, the best of the best will compete for the $100,000 grand prize.

Though Hearthstone is relatively new to the scene, and some have doubts that it’s suited for a competitive circuit of this scale, some intense matches (like the one below) during the initial phases of this championship series are showing players that Hearthstone has some serious potential as an eSport.

Heroes of the Storm World Championships

Hearthstone isn’t the only event to look forward to at BlizzCon this year. On top of the championships for their wildly successful card game, Blizzard will also be hosting the world tournament for Heroes of the Storm.

We’re coming up fast on the North American Championship, which is going down September 19-20. The top teams will compete for a $200,00 grand prize.

Last but not least, the Starcraft II Global Championship series will complete the tournament trio at BlizzCon this year. Sixteen players will compete for the $100,000 grand prize in Anaheim.

Starcraft II is, of course, Blizzard’s longest-running competitive series of the three we’ll see at BlizzCon. This marks the third year of its competitive circuit.

There’s a lot to look forward to in the coming months. Pay a visit to GameSkinny to stay up-to-date with all the latest tournament news. And if all the excitement has given you a competitive itch, visit Gamer Launch to set up a scrim and play like a champ.